by Monique | Plants and Trees

Marigolds, with their bright yellow, orange, and red blooms, don’t often show pest damage like other plants in a garden. I recently did some research to find out if marigolds can repel garden pests.

And here’s what I found out…

Marigolds may prevent many garden pests, such as nematodes and mosquitoes, and even some larger animals like rabbits. A marigold’s scent and compounds released by the plant’s roots can stop pests from coming into the area or eating the plants or vegetables nearby. Marigolds can also attract certain garden pests and beneficial insects.

It’s amazing how plants have natural ways to protect themselves from being attacked by insects and animals, which is how they ensure their survival in the wild. In fact, one study has shown how marigolds produce natural insecticides, which repel harmful insects.

When you grow marigolds in your garden, you benefit from these natural pest-repellent properties. Let’s find out how marigolds can help you keep harmful garden pests under control and away from your other plants and vegetables.

Let’s explore each one to discover how it works…

According to researchers, a marigold’s flower has the strongest insecticidal property of the plant.

Some marigolds, such as the Signet Marigold, naturally produce a scent compound called ‘limonene’. Studies show that plants use limonene to communicate with other plants, and to repel and attract insects.

In fact, limonene is an ingredient in some eco-friendly pest control products on the market, such as this one from Amazon that repels ants, roaches and fleas.

Marigold flowers have a very distinct smell. Some smell lemony, while others have a robust licorice smell. You might find the smell of marigold leaves or flowers too strong to enjoy, but the good news is that the scent is just as bad for insects and puts off bigger animals with a good sense of smell!

It is believed that this Marigold scent is strong enough and designed to effectively repel garden pests. The powerful marigold scent is also intense enough to hide the scents of vegetables and other plants in your garden, so insects and animals don’t know they are there to eat.

Within weeks of being planted, marigold roots release ‘thiophene’ and ‘alpha-terthienyl’. These compounds spread into the soil around the plant, and they are very effective insecticides that repel pests, especially those that cause harmful root galls. Root galls are growths or knots on a plant’s roots.

This is what root knots look like on a plant’s roots:

Not all root galls are bad for a plant. But galls that appear when a root is eaten by microscopic roundworms, or nematodes, could kill the plant. The galls damage the plant’s internal system, so it cannot carry water and nutrients from the roots to the rest of the plant.

The compounds released by a French Dwarf Marigold’s roots repel nematodes best, keeping these harmful worms away from the marigolds and any other plants growing nearby.

We know that marigolds use their flowers, leaves and roots to deter garden pests, but what garden pests can we kill, repel, or keep under control by planting marigolds?

Here’s a list of garden pests that marigolds prevent:

Nematodes are the number one pest that marigolds, particularly the French Dwarf varieties, prevent in the garden. Nematodes are microscopic roundworms that are the main cause of harmful root galls or growths on plant roots, especially in tomatoes.

Nematodes are particularly hard to control as they can spread from one infected plant to many others in a garden. Also, there are not many ways to deal with nematodes as it’s not recommended to use pesticide products or chemicals at home to kill nematodes.

For the best results against nematodes, plant marigolds before they flower in late Spring. Leave them to grow thick and strong for about 4 months, until the end of Summer or early Fall, then plow the marigolds into the soil. The decomposing marigolds will continue to release nematode-killing compounds into the soil. These compounds stay in the soil through Winter and become active again in Spring!

Whiteflies are small white bugs that are more closely related to aphids than flies. Whiteflies hide under a plant’s leaves and suck the plant’s precious sap. Over time, the leaves turn yellow and may die.

The problem with whiteflies is that they double their population very quickly, with a lifecycle of about 3 weeks.

Studies show that planting French Marigolds before whiteflies take hold can really slow the development of a whiteflies populations throughout the Summer season:

Our work indicates that companion planting short vine tomatoes with French marigolds throughout the growing season will slow development of whitefly populations. Introducing marigolds to unprotected tomatoes after significant whitefly build-up will be less effective.

Source: With thanks to PLOS ONE

Slugs love eating marigolds. Now, you might be wondering why they are on this list of garden pests that marigolds prevent. Well, you can actually use marigolds to stop slugs from eating plants that you don’t want slugs to eat – by giving the slugs marigolds to eat instead.

Protect your plants from slugs by planting marigolds in a circle around the plants you want to keep safe. Slugs will reach the marigolds and start eating them, rather than your other plants.

In the evening, walk around the marigold ring and pick up any slugs you can find on or under the marigold plants. Throw them in a bucket of soapy water to kill them.

For the full list of everything you can try to stop slugs from eating your plants, click HERE.

Cabbage worms mature into cabbage moths. These moths eat the tender parts of a plant, leaving a skeleton-like look to the plant when they are done.

Planting plants with a strong scent, such as marigolds, between cabbage family crops can help to keep cabbage worms and moths away.

In a recent study, it was found that the thiophene compounds released by a marigold’s roots can kill mosquitoes and their larvae:

The chemists found that several compounds in the plants were insecticidal,
including volatile chemicals called thiophenes. These killed the larvae and
adults of both Aedes aegyptii, the mosquito that carries the malaria
disease, and Anopheles stephensi, the mosquito responsible for carrying
yellow fever

Source: With thanks to New Scientist and The University of Alabama

Many gardeners report that planting a border of marigolds stops rabbits from coming into their garden. The idea behind this is that rabbits don’t like the strong smell of the marigold flowers and leaves, even though most marigolds are perfectly safe to eat.

Some gardeners have found that the best marigolds to plant to deter and withstand rabbits are the Taishan Marigolds series (get the seeds on Amazon), as they are strong and sturdy, with a strong smell, and beautiful bright flowers.

Other pests repelled by marigolds

According to the New York Botanical Garden, marigolds can also repel the following pesky garden pests:

Not all insects are repelled by the sight or smell of marigolds. Planting marigolds can attract many beneficial insects to your garden too.

Many gardeners and gardening websites say that planting marigolds will attract:

But marigolds might attract some unwanted insects, so keep an eye out for:

Spider mites are smaller than the head of a pin and are related to the spider family.

These tick-like bugs can lay hundreds of eggs, leading to an infestation in a garden within days or weeks. Spider mites can cause widespread damage to plants as they often carry diseases.

Some Marigold types are more effective than others at keeping pests away.

There is some debate as to which type is the most effective, but the following species have proven insecticidal and anti-fungal abilities:

Some marigold hybrids have been created to produce pretty marigold plants without the strong marigold scent. Because the marigold’s natural protective scent has been removed from these hybrids, the plants are not good at preventing garden pests.

Here are some tips and tricks on how to grow marigolds and get the most from their ability to prevent garden pests:

Marigold seeds are available at most local nurseries, big-box garden centers, or on Amazon. If you grow your marigolds from seed rather than buying seedlings or plants, you are guaranteed that your marigolds won’t have insecticides or other chemicals on them (which are highly toxic to beneficial insects, such as bees).

When there’s no longer a threat of frost, and the soil is warming up, sow seeds an inch apart and water well. Marigold seeds can take up to 2 weeks to germinate and another 6 weeks to grow into a flowering plant.

The plants grow best in well-draining soil, where there is full sun, but they can survive in many different kinds of soil.

Companion plants: What vegetables to plant with marigolds

Marigolds repel pests, which has the added benefit of preventing pests from attacking nearby vegetables.

If you have a vegetable garden, it’s a good idea to plant marigolds with these vegetables:

For the best results, plant marigolds in rows between the vegetables or around the edge of the vegetable patch. At a minimum, plant 1.5 to 2 marigold plants per vegetable plant to effectively prevent pests.

Plants that cannot grow near marigolds

Unfortunately, not all plants respond well to the compounds that marigolds release into the soil to repel pests. For example, beans and cabbage plants have a negative reaction to these compounds, which stops them from growing strong root systems. In the end, this may stunt their growth or kill them over time.

Marigolds can also steal a lot of water and underground nutrients from nearby tomato plants.

If you see your plants or vegetables struggling to grow near your marigolds, remove the marigolds and plant them around the perimeter of your garden instead.

If you’ve got insects and pests eating your plants and fruit trees, you’re probably here to find out how to make white oil to get rid of them. The good news is that it’s very easy to make this insecticide spray at home, with ingredients you already have sitting in...

END_OF_DOCUMENT_TOKEN_TO_BE_REPLACED 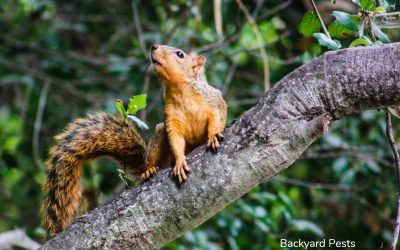 Squirrels Harming Your Trees? 3 Things Squirrels Do To Trees

Some people think squirrels are pests, while others find them fun to watch. No matter what you think about squirrels, you’re probably here to find out if squirrels are hurting your trees… Squirrels harm trees when they strip too much bark off a tree. This exposes the...