10 Reasons Why Bed Bugs Bite Some People And Not Others

Is one person in the house getting bitten by bed bugs but no one else? Then you’re probably wondering why that is.

If bed bugs are hungry, they’ll bite anyone closest to them. It’s highly unlikely they’ll crawl further because they prefer one person over another. But it may seem like bed bugs skip certain people because those people don’t show any signs of bites, or it takes weeks for their bites to appear.

Even though hungry bed bugs bite anyone, they do choose who to bite first and who not to bite at all when given the choice. Below are all the reasons why bed bugs would bite someone and not other people nearby.

By the end of this blog post, you’ll know exactly why bed bugs bite some people and not others.

Some people show no signs of being bitten

Some people have an allergic reaction to bed bug bites, and they get raised, red, itchy bumps when bitten.

The more often someone gets bitten, the more likely they’ll start reacting to bites and showing signs of being bitten.

For some reason other people, particularly the elderly, never have any reaction to bed bug bites – they’re unaware they have bed bugs.

If one person seems to be getting bitten by bed bugs but another person isn’t, it might be that both people are being bitten but the first person shows signs and the other doesn’t.

Signs of bites are delayed

Bed bug bites can take up to two weeks to show. So if someone has bed bug bites, they might have been or be getting bitten somewhere else. [source]

That person might be bitten at the office, in a hotel, on a train, or pretty much anywhere and only see evidence of bites a few days or a couple of weeks later.

Seeing bed bug bites doesn’t mean the person is being bitten where they are currently spending time. This person has bites from another time and place, but someone who wasn’t there when the bed bugs were encountered won’t have any bites.

So it might seem like bed bugs are choosing one person over another, but they aren’t – they chose whoever was around when they wanted to eat.

Only one person is there when bed bugs are active

Bed bugs are most active at night, especially at 4 a.m. in the morning. However, bed bugs adapt their feeding schedule based on when a host is around to bite.

So, if two people that sleep in a room work night shifts, bed bugs come out during the day to bite these people when they are there and asleep.

But if one person works night shifts and isn’t around when bed bugs are active, then the second person is more likely to get bitten because they are in the room when bed bugs want to feed.

Bed bugs feed on human blood. To do so, they need access to human skin, which they pierce with a long beak and suck out blood.

If two people sleep next to each other, and one sleeps naked while the other is fully clothed, the naked person is more likely to get bitten by bed bugs because they have more exposed skin to bite than the person with clothes on.

This doesn’t mean that if you wear pj’s to bed you won’t get bitten – bed bugs will find a way in if they have to, or they’ll bite you on the face or even your scalp (though bed bugs are not a fan of human hair – here’s why).

The bites are in hard-to-see places

If one person has bites and another says they don’t, it might simply be that the second person can’t see their bites and think they have none. But they might have been bitten on the back of their neck and shoulders, on their back, or behind their legs.

In this case, it’s best to look in the mirror or get someone to check the back of the body for signs of bites.

One person spends time closer to the bed bug nest

When bed bugs first arrive, there might only be a few of them. These bugs scurry off together to find a dark place to hide, and come out again when they’re hungry.

Most bed bugs start off hiding on the mattress or box spring, against the wall where it’s dark.

If someone sleeps closer to a bed bug nesting place than another person, it’s more likely the bed bugs will feed on the closer person. This is because there’s less distance for bed bugs to cover, which means less time out in the open and less risk of getting caught and/or killed.

But bed bugs multiply quickly, and then they spread across the bed, the room, and into other rooms. As their numbers grow, more people in the household are likely to be bitten, not just one person close to the nest.

Click here to find out how bed bugs spread through a house and where they hide.

Bed bugs prefer the blood type they grew up on

There’s no particular blood type that all bed bugs love: Bed bugs bite any person with any blood type.

But just as you probably enjoy eating foods from your childhood, so do bed bugs.

Bed bugs seem to prefer the blood type of the person they fed on when they were growing up or the main person they bite as adults, called a host.

Bed bugs don’t like blood with alcohol in it

If one person drinks alcohol and the other doesn’t, bed bugs are more likely to bite the person who doesn’t drink. [source]

This is most likely because the blood without alcohol is healthier to drink, and less likely to cause problems for bed bugs.

Something other than bed bugs are biting

The only way to be sure you have bed bug bites is if you find a bed bug or other evidence of bed bugs. Click here for a list of bed bug signs to look for.

If you haven’t found bed bugs or signs of them, the bites might be from something else, or even a health issue. This is one reason why someone might appear to be getting bitten by bed bugs and others aren’t.

There are several bites or conditions that can be confused with bed bug bites, such as:

Bed bugs are attracted to body heat, the smell of carbon dioxide, and the smell of human skin and sweat. All these things tell bed bugs that a human and food source are nearby.

There’s no bed bug repellent on the market that works as well as, say, mosquito repellents.

But there are some things and smells that bed bugs try to stay away from, such as the smell of DEET (found in strong insect repellents like these), alcohol, vinegar, essential oils, and, some claim, Vicks VapoRub.

If one person uses products with these ingredients or smells like any of these things, they might be less likely to get bitten by bed bugs than someone who doesn’t. 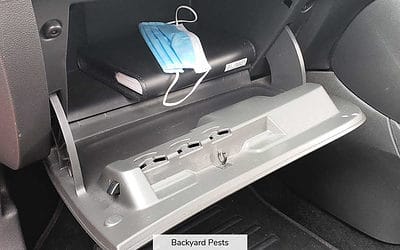 7 Ways To Get Rid Of Bed Bugs In A Car

To get rid of bed bugs in a car, first stop more from coming in. Then combine several methods to kill the bed bugs until you see no signs of them for at least 6 weeks. Some methods include heat treatments, steam, and starvation. There are many ways to kill bed bugs in...

END_OF_DOCUMENT_TOKEN_TO_BE_REPLACED 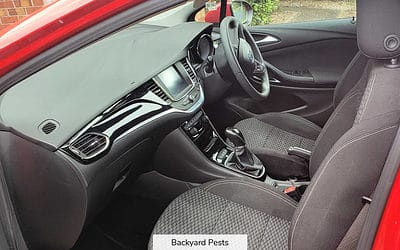 10 Places Bed Bugs Hide In Cars: How To Find Them (With Pictures)

Bed bugs usually hide in car seats, along seams and stitching, and under the seats where it’s warm and dark. But bed bugs can hide anywhere in a car, so it’s important to check the interior from top to bottom, left to right, including the ceiling, console, and floors....