How Snails Poop: A Story Of Flipped Shells And Breathing Holes

Snails have a foot for a body. With such an unusual physique and a need to get rid of waste after eating food, how do snails poop?

Snails poop from their anus, which sits inside their shell towards the front of their body (on the same side as their head). When a snail poops, the poop comes out of the anus inside the shell, then slides out the side of the shell. It looks like a long thin sticky tube and drops to the ground.

Snails and their poop make a fascinating story. From thousands of teeth to twisted shells and poop breathing holes, here’s everything you ever (or never) wanted to know about snail poop…

How snails digest food to poop

The story of snail poop has to begin with snail eating.

Snails tear and hold food with a cartilage jaw. They chop food in their mouth or scrape it off a surface using a tongue-like ribbon made of thousands of tiny teeth.

Click here for the full explanation on how snails eat food with their mouths and teeth.

Small food chunks are mixed with saliva to make a pulp or paste. Now the food is wet enough to be pushed down the snail’s esophagus using muscle contractions, and the pulp ends up in the snail’s stomach.

Digestive juices break down the food in the stomach, including fats, proteins, carbohydrates, and cellulose (the tree fiber that paper is made of, which is why snails love to eat paper!)

Waste moves into the intestine where nutrients are absorbed. Undigested food and foods that snails can’t digest, like mature grass, continue moving through the intestine towards the anus.

A snail’s internal organs, such as its liver, lung, heart, and stomach are all kept inside the snail’s shell. This is one of the main differences between snails and slugs, which keep their organs inside their body.

When a snail is very young, its shell turns or rotates 180° to face the opposite direction. This is called “torsion”. When torsion happens, the snail’s organs flip from front to back with the shell. For example, the snail starts life with its lung and anus at the back of its shell. After torsion, the lung and anus end up at the front of the shell, closest to the snail’s head.

When a snail is threatened by a predator or scared of something, it pulls itself into its shell as a way to protect itself from harm.

The original shell direction, with the anus at the back, means a snail must first pull its body into the shell and its head last. This leaves the head exposed for longer and puts the snail at risk of losing its head and its ability to eat, which will ultimately kill it. This is risky.

After torsion, when the anus is in the front of the shell, the snail can pull itself into its shell head first, giving it the quickest protection from danger and a higher chance of survival by keeping its head.

On one side of the bottom of the shell, towards the front of the snail, there is a small hole. This opening lets air into the shell so the snail can breathe with the lung inside its shell. The gap is called a breathing hole.

A breathing hole is important for snail poop…

Snail poop is released from the anus, which is close to the lung and breathing hole. This means that a snail poops into its shell. The poop then slips through the breathing hole and out the side of the shell, dropping to the ground or whatever the snail is crawling on.

Snail poop usually looks like a rope or tube of sticky poo as the snail releases it. But the poop soon dries out to become smaller, paler, thinner and string-like, often with the two ends curling in to make a “C” shape.

The color of snail poop depends on the color of the snail’s shell and the food it eats. Most garden snails’ poop is brown because they have brown shells or green from the plants they like to eat. If a snail eats watermelon its poop often turns red, carrots make snail poop orange, and cuttlebone or calcium from the soil make snail poop white, black, or gray.

The following video shows a snail pooping, and how the poop comes out of the snail’s breathing hole to the side of its body. It also shows different colored snail poop, based on what the snails have been eating:

Do snails poop a lot?

Snails are nocturnal, which means they sleep all day and stay awake at night. Most of their waking hours are spent eating. And the more a snail eats, the more a snail poops. If food is plentiful and a snail is eating well, it poops very often.

Snails poop whenever they need to, no matter where they are. This is why you find snail droppings wherever snails spend their time, such as on leaves, on your walls or other high places, on the ground, and anywhere snails like to hide and sleep during the day.

Is snail poop good for plants?

Snail poop is rich in minerals and elements that plants need to grow and stay healthy. This makes snail poop an excellent fertilizer for plants. Garden snails mostly eat plants, fruits, vegetables, and other plant matter, so when they poop, they return nutrients to the soil for plants to absorb and use.

If you ever buy fertilizer for your yard, you might have noticed three numbers or three main nutrients listed somewhere on the fertilizer’s packaging. These numbers tell you how much nitrogen (N), phosphorous (P), and potassium (K) are in the fertilizer.

This is important because these three nutrients are the three main nutrients that plants need:

There are also other elements in fertilizer that feed the soil.

As you can see from the table above, snail poop contains all three important fertilizer elements and many other elements that are important for plant nutrition.

Snail poop is not dangerous and shouldn’t do you any harm if you touch it, though it’s best to wear gloves just to be safe. Always wash your hands after touching snail poop.

If there are areas in your yard where there is a lot of snail poop, wash the poop into the ground with a hose or bucket of clean water. This will break up the poop and let the poop’s nutrients soak into the soil, fertilizing the area for you.

The following tips and products from Amazon will help you get rid of snails in your yard: 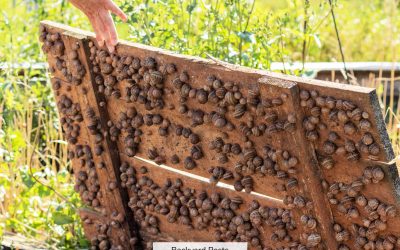